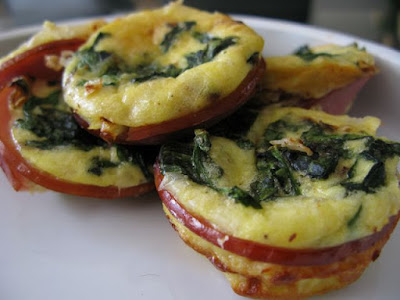 Today I had to choose, either have to put away the Christmas decorations or make quiche. Usually, come  January 1st, I have everything put away and and I am ready to face a new year. This time, the holiday season flew by, leaving me wishing they could stay a little longer. I chose quiche.

I made quiche because A. I like it.  B. I have everything in the fridge to make it. C. As my cookbook recipe writing adventure continues, I wanted to try using a ham slice instead of a traditional crust. I used my basic spinach quiche base, picked up some sliced "Canada" style bacon, (AKA center cut pork loin) and forced it into a muffin cup pan.

The first idea was okay it was cute and tasty but just a little bulky and difficult to eat. The pork loin slice was too thick and wasn't small enough to be considered an appetizer. As a brunch main, it looked lonely by itself on a plate it...hummm- might be okay with a salad... Anyway, quiche experiment #1 turned out to be difficult to get out of the cups and the baked on egg mixture devastated the pan.

I make the decision to soak the pan and sneak it in the pile when my husband does the dishes, next I reworked my creative quiche idea. Take #2 needed something thinner then the ham and I wanted to make them smaller. Looking for a new base, I found a package of salami in the fridge. The Genoa was about 31/2 inches and thinly sliced it fit nicely in a mini muffin pan and held a one to two bite portion of quiche filling. Yea! I wrote the recipe down for the little ones, then considered packing up the season.

Today I decided, quiche #2 is a candidate for the book, I am going to miss the house decorated for Christmas and as for quiche #1, I won't miss cleaning the pan. 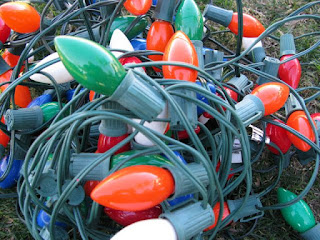 Email ThisBlogThis!Share to TwitterShare to FacebookShare to Pinterest
Labels: cookbook

Love the quiche take#2. Gr8 photo. Made me hungry...and I just said "no" to Bacon Boy's offer of scrambled eggs...hmmm.

Really excited about your book!

Thx 4 ur comment on my Fake Lasagna post. We need to have a martin together (on line) sometime!!
Cheers
SAUCY

The sliced prosciutto is a great idea! I will try that. Yes we will need an online martini soon!

What beautiful little quiches! I adore quiches and will have to add a recipe to my blog. 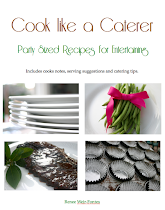